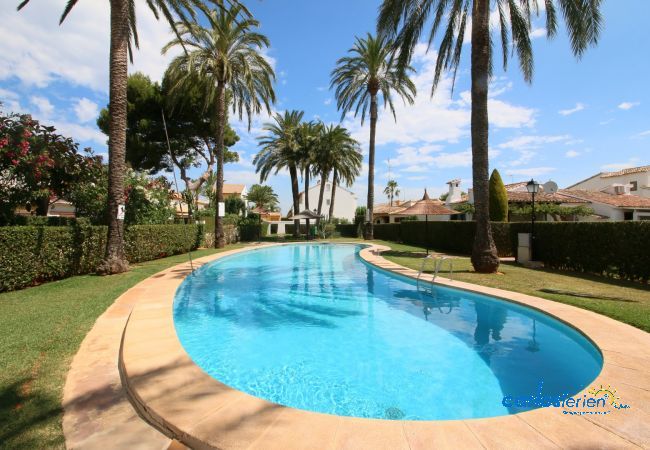 Beautiful villa located in an urbanization on the beachfront. The house has its own fully enclosed garden with direct access to the community pool which offers hammocks and an outdoor shower. The urbanization has direct access to the beach just 200m from the house.
This two-story chalet has a capacity for 6 people and 300m2 of land. The garden is made up of lawns, lemon trees, hibiskus and shrubs, as well as a gas barbecue area.
Through a few steps we access the interior of the house where we find the living room with satellite TV, gas fireplace, ceiling fan and exit to a fully furnished covered terrace towards the garden.
The modern kitchenette has all the necessary amenities such as a gas stove, microwave with grill and built-in oven, kettle, dishwasher and a Philips Senseo coffee machine, plus a large fridge with a separate freezer.
We continue on the ground floor where through 3 steps we access the two double rooms and a bathroom with a shower and bidet where the washer and dryer are also located. One of the rooms has a bed of 180cmx200xm and the second room has a bed of 160cmx200cm.
The third room is on the top floor and has a 180cmx200cm bed. On the second floor we also find a bathroom with a shower and a bidet. The three rooms described have a ceiling fan and mosquito nets on all windows.
The house is also available in the colder months because it has gas central heating.
The owner appreciates that there is no smoking inside the house.
Pets on request.
Covered parking for one vehicle on the same plot.
The distance to the beach is only 200m, restaurants 300m, supermarket 500m and to the city center of Denia 5.5km.
Electricity and Gas (if any) are included from June to September.
From October to May they are not included: The cost per Kw consumed and the cost of Gas will be paid according to the agency's conditions.
More Details
Hide Details

- No smoking
- No pets allowed

From the booking date until 61 days before the check-in, there is no cancellation penalty

In case of cancellation the following charges will apply:

8.5 8 reviews
All English
All reviews have been checked and authenticated. Once you have received a 'rate your stay' email based on your confirmed reservation, you can leave an accommodation review.
Show more
Show less
€742 /week
Dates
Price for  nights
Book
Dates